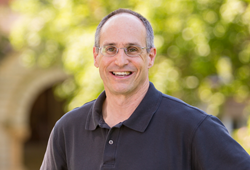 Terry Pertile '85 experienced open access to Mac professors before he was even officially a student at Macalester.

Many Mac alumni remember taking time to find their paths in college, but Terry Pertile '85 found his on a campus visit months before he even enrolled. He sat in on beloved Mac professor James Smail's biology lecture, then took a class with him the following fall and declared a biology major, choosing Smail as his academic advisor.

"He had open office hours all the time, and some of my fondest memories at Mac are from sitting in his office, just gabbing," Terry says. "The access I had to my professors at Macalester was very important to me."

Those conversations with Smail-as well as other faculty mentors such as Kathy Parson and Jan Serie-stayed with Terry and shaped his path, and they're a big part of why he gives back to Macalester today. He studied immunology in graduate school, thanks to Serie's guidance, and pursued a career in medical devices and consulting.

As soon as Terry finished graduate school, he felt compelled to support his undergraduate alma mater. He's been a loyal Annual Fund donor for 20 years.

"Macalester had such an important influence on my life and my development as a person," Terry says, adding that the critical thinking skills and broadened worldview he honed in college changed his perspective. "I felt very strongly that I should give back to support current students."

That motivation also prompted Terry and his wife, Lisa, to include the college in their will, establishing a provision for a scholarship that will support a biology student.

"For me, it became a question of where you can do the most good-and I thought back to my own experience and decided that if I could help someone else get that experience, too, then I should."

When he and Lisa created their will years ago, Terry says he knew little about the options within planned giving. Today, he says, it's a different story, with many more resources available to help people find the right option.

"There are a lot of worthy causes out there, and people have to follow their heart," he says.

"If the college experience at Macalester meant as much to my fellow alumni as it did to me, I encourage them to consider supporting Mac in this way."