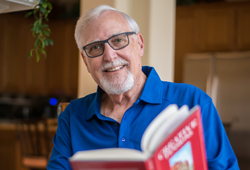 Rolland Oberg '60 grew up across the street from Macalester in the 1940s and '50s, back when the stadium area at the south end of campus was still the Mac woods. His parents encouraged him to enroll at Macalester, and he heeded their advice, enjoying lunch breaks at home and no commute. Rollie also found a passion for geology that went on to shape the rest of his life. He thrived thanks to individual attention from his professors, built an understanding of key geologic principles, and got a taste of fieldwork by collecting Cretaceous plant fossils and measuring stratigraphic sections along Minnesota's rivers.

Rollie is no longer across the street from 1600 Grand (he lives outside Houston now) but he hasn't forgotten how his Mac education prepared him for a seamless transition into graduate school and then a successful career at Exxon.

After retirement, Rollie thought back to the place that opened the door to his career path, and he remembered receiving a scholarship to help him attend Macalester. "I thought, 'I'd like to do something like that, too,'" he says. Rollie decided to establish his own scholarship to honor his parents for steering him toward his alma mater.

He also created a faculty-student research fund to support Mac's geology department. His generosity means that more students can delve into rigorous research experiences, now and in the future. Through hands-on learning in the field, studying the geologic record and processes, they will build crucial skills for graduate school and potential career paths.

More than 50 years after Rollie's own graduation, he wants to make sure that students can access the hallmarks that define Macalester. Rollie created both the scholarship and research fund through a provision in his estate plans, then began funding them outright, eager to see his support in action. "I want to make sure that students attending college now and in the future get the chance for the kind of education I got at Mac," Rollie says. "As long as we continue to financially support scholarships and research, Macalester will continue to flourish."